Each year on February 14, loved ones exchange cards, candy, flowers and gifts, all in the name of a mystic saint, St. Valentine. Who was this saint, and how did these traditions start? Explore the history of the most romantic day of the year!

Within the Catholic Church, at least three different martyred saints bore the name Valentine or Valentinus. One particular Saint Valentine is said to have performed surreptitious Christian weddings for soldiers who were banned by Roman Emperor Claudius II from partaking in the sacrament of marriage. The legend also states that Saint Valentine cut hearts from parchment and gave the hearts to soldiers and other oppressed Christians. This may explain the widespread use of the heart motif on Valentine’s Day.

Roman Emperor Claudius II insisted that Saint Valentine convert to Roman Paganism, and when he refused, he was sentenced to death. While imprisoned, Valentine fell in love with a young girl who visited him. On the eve of his death, it is said that he wrote a letter to the girl and signed it “From your Valentine,” an expression that is widely used today. 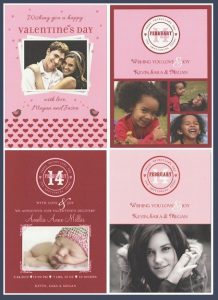 The paper Valentine first appeared sometime after 1400 A.D. A poem written in 1415 by Charles, Duke of Orleans, is the oldest known Valentine in existence. He expressed his love for his wife while he was imprisoned in the Tower of London.

During the 17th century, Valentine’s Day began to be regularly celebrated in Great Britain. By the middle of the 18th century, it was common for friends and lovers in much of the world to exchange tokens or sentiments of love.

The Greeting Card Association estimates that 1 billion Valentines are sent each year, making Valentine’s Day the second largest mailing holiday of the year. (An estimated 2.6 billion cards are sent for the Christmas holiday.) It’s interesting to note that approximately 85 percent of all Valentines are purchased by women.

Invitations4Less.com has a wonderful selection of Valentine’s Day cards. Include your photo for an even more personal touch! And when you consider how much individual cards cost at your local card store, our prices can’t be beat!